Every once in awhile we like to share some of the letters we get from our customers, and here’s one that is particulary timely, especially for baseball fans and Dodger’s fans in particular.  It comes from Mike W. in Cedar Rapids, Iowa: 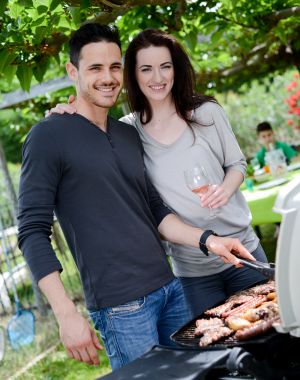 Over the years of my tailgating experiences, many things have changed while others have remained the same. The community spirit, camaraderie, and the love of food and baseball have made tailgating scenes the last great American neighborhoods. Going to several home games each year I guess would make me a true fan of the team. Not only do you have a fun time but you get to hear a legend in sports announcing call the game. Vin Scully is as much a part of Dodger baseball as well as any player who has ever played the game in a Dodger uniform. For 67 years he has made sports announcing his career.

While I’ve been a huge Dodger’s fan and a longtime fan of Vin Scully in particular, I’ve never actually attended a Dodger’s game in person. (It’s kind of difficult when they are in Los Angeles and me and my family live in eastern Iowa). But that doesn’t mean I’ve never been to the ball park on a summer’s day and dropped the tailgate and grilled some food to go along with those ice cold drinks in the cooler.

There is something to be said about the excitement you get when you drive into a stadium parking lot, particularly a minor league stadium parking lot. Friends and family usually get together for a little pre-game celebration telling stories and laughing as game time ticks closer. Everyone decked out in teams hats, jerseys, t-shirts, and so much more. Some have baseball gloves in hand playing a game of catch. Evidence of the dedication and enthusiasm that make tailgating almost a part of the game, as the game it’s self.

Of course one of the staples of any tailgate is of course food. There is nothing like pulling out my trusty portable propane grill and loading it up with hamburgers, hot dogs and, lets face it, pretty much anything your taste buds crave. Good food just goes with making memories like these last forever. I made the mistake early on of using charcoal for my tailgate grilling but I soon found out it took way to long to heat up, and by the time it cools down where you can put it away, the game is half over. So me and my trusty portable propane grill have been comrades in baseball for nigh onto 20 years and counting. Pro tip: propane is the only way to go when it comes to tailgate grilling.

Last month, Vin called his last game and fans like me mourn the loss of what can only be described as a good friend on the radio or TV. In celebration of this remarkable man’s life, me and my friends raised a glass or two and chowed down on my patio this past weekend, and reminisced about the man, the game, and all the good times we’ve had along the way.

And I just wanted to write you and say “thank you” for being there too.  This may seem slightly odd that I would be writing you about this, but a couple of years ago I became a loyal customer of yours when I bought a propane tank on my way home from the store and had a problem with it.  I went a couple of blocks down the street in a panic because people were coming over in less than an hour, and I got one of your tanks.  I hooked it up and it worked first time.  And I’ve never had a problem since.  So in a very real sense, you’ve become a part of our outdoor grilling tradition.  Thank you for a great product, and great service too.”

It was really special to get this note from Mike and his family. And we really appreciate everyone who invites us to their cookouts. You’re very special to us. And from our family to yours, we truly mean that with all sincerity.

When it comes to BBQ propane grill tailgating, it goes without saying that you don’t want to run out of propane while you and your friends are having a great time at the ball park. That’s why Mighty Flame propane has propane exchange locations almost everywhere there is a convenience store in citys and towns large and small across the country. Mighty Flame propane tank exchange has been around for over 25 years with clean, reliable propane tank exchange wherever you live.